Lack of lights on bicycles in Cambridge has been a hot topic for as long as I can remember.  The city Police, local councillors and bottom half of the internet commenters have been absolutely certain that riding a bicycle without lights is a dangerous activity.

At Neighbourhood Policing meetings, locals get to specify issues that neighbourhood Police should tackle and targeting cyclists without lights is predictably in the top 3 priorities as we move into autumn. Policing appeared to go up when Cambridge Police began issuing Lights instead of Tickets (LIT) in late 2012.  This also coincided with the launch of Police and Crime Commissioners, a four year post filled by Graham Bright who has thrown his weight behind tackling cyclists without lights naming this Operation Pedalo.

Headlines tell us that a lot of Police Community Support Officer (PCSO) time has been spent in Cambridge on stopping cyclists without lights. After 3 years of big pushes we have enough data to measure the effect of the campaigns and decide if the scarce Police time is being used wisely.

Lets take a look at the raw number of cyclists being injured in Cambridge.  The graph below shows the numbers of cyclists killed, seriously injured and slightly injured.  This means any collision that emergency services were involved with.  Its showing 15 to 20 casualties a month from 2005 through 2014.

Another useful baseline is the amount of cycling casualties in each month of the year over the same 10 year period 2005-2015.  There are many effects to look out for.  Numbers of cyclists in Cambridge is less affected by season and more affected by University and College terms.  Winter months have more darkness which is relevant to Operation Pedalo and LIT.

The PCSO effort reached a peak in Autumn Winter 2012.  The most interesting story related to the efforts is "1000 Fined in Blitz on Bike Lights" (Cambridge News Jan 14th 2014)

The story shows the impact the PSCO efforts had:

Sgt Jayne Drury said the scheme had been so successful that nine out of 10 cyclists were now thought to be riding with lights.

She told the city council’s west/ central area committee that the figure for nights back in August was believed to be six out of 10.

Such a significant change of light usage should show up in the road safety statistics for Cambridge cyclists.  Lets look closely.

The graph below looks at each month.  Within each group is the number of casualties sequentially each year.  The peak of PCSO activity is between Aug and Dec 2013, thats the second to last bar in each group.  It's hard to make out any clear pattern of lowering of casualties.

The STATS19 records indicate if a collision happened during daylight or hours of darkness.  Lets look at collisions in the dark only.  This should be a better dataset for measuring the effectiveness of more lights on bikes.

I cannot see any clear pattern of improved safety for cyclists as a result of Operation Pedalo.

I spent some time picking through the Cambridge News stories to find periods of increased PSCO effort.  See if you can match up the story to a point on the graph. 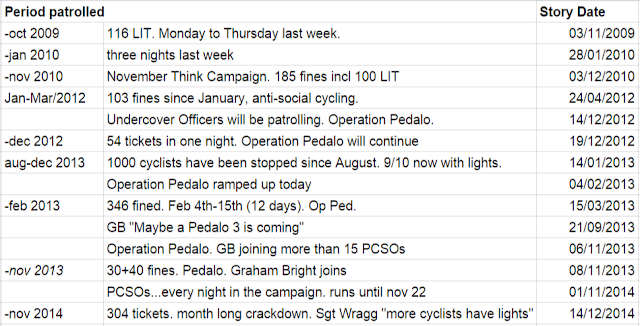