We get snow about twice a year in Cottenham and often it is a dusting, but Saturday night brought us 20cm.  If you have children, as half of those near me do, this means an unmissable opportunity.

Sunday morning, our quiet residential roads were filled with ... yes ... people !  Loads of them, milling about talking, having snowball fights, larking about.  That would include me towing the children about in a sledge attached to a mountain bike.  Anyone without children was either in bed, or digging their car off the driveway.  Pavement and road merged into one, kind of like Exhibition Road.

After lunch, vehicles started to get moving. They grit the B1049 but not our housing estate's road so you have to get off them first. Because of the slippery conditions and amount of adults and children in the road all drivers negotiated their way past at crawler pace - except for one who came through at speed pipping their horn.  I guess they were not skilled enough to drive in the snow and did not want to stop for fear of getting stuck.

But what a cracking day of fun.  Snowmen everywhere, igloos and wet gloves hanging on the radiators.  Children were outside all day long, together, happy and safe.  That's how it should be every day.  It really could be like that.  Thirty years ago, that's how I used to play outside my house, in the road. 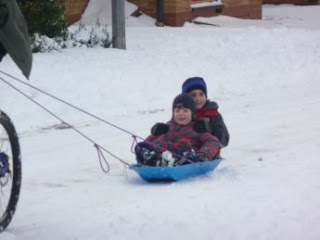 Monday morning was a different story.  The gritters and ploughs had kept the road lanes clear.  Footpaths, and cycle lanes were not.  I cycled in on the touring bike, walking off our estate then onto the clear road on touring bike tyres, avoiding the lethal snow and avoiding the slush too.  Arriving in Histon, there was a smashed car on the verge, a reminder of Saturday night's snowfall and how poor some peoples driving can be.

Cycle lanes were clear one minute, then almost without warning would be filled with slush and you'd have to join the main road lane.

Just after the B1049/A14 roundabout I am close passed by a StageCoach bus.  They'd been so well behaved recently too.

On the way home it was busier.  Histon Road was horrible.  Plenty of slush so I had to stick to the main road lane but cars would not budge across the white line when overtaking leaving very little passing room.

Those of you who took alternative forms of transport today were right to do so, but not because of the snow, because of the drivers you share the road with who cannot alter their driving behaviour in the face of abnormal weather conditions.

So much for The Times safer cycling campaign, it has clearly not reached the general public. I really hope it can make a difference at a government level where it matters most, specifically point 4 which is about increasing money available for cycle infrastructure.

If you haven't done so, sign up to the campaign here, with the mainstream media on side it is a great opportunity to make your voice heard.

Posted by Cottenham Cyclist at 22:53