I've just spent two weeks holidaying in the Netherlands and managed to cycle around 100 miles of routes through cities, towns, villages and rural areas.  What a fabulous place to cycle - you can see why so many people choose cycling as a way to get about.  I'll split across a few posts what caught my eye.

When showing us how the Dutch cycle infrastructure works, it's the built features - eg separated cycle tracks, lanes, roundabouts etc - that get most of the press. But an aspect that's hard to grasp from photos that becomes immediately obvious when you cycle in The Netherlands is just how little traffic you ever have to interact with.

The infrastructure is the end result of a general ethos of creating a liveable and safe street environment and controlling the level of danger when vehicles and people have to mix.  From my observations, this boils down to:


In practice, cycling in the Netherlands involves using a lot of streets where you are not separated from cars and trucks, but because the traffic speed and density is low, it's not a problem.

Right in the heart of any town or city area are shopping streets.  In many cases, through traffic is not allowed using barriers. 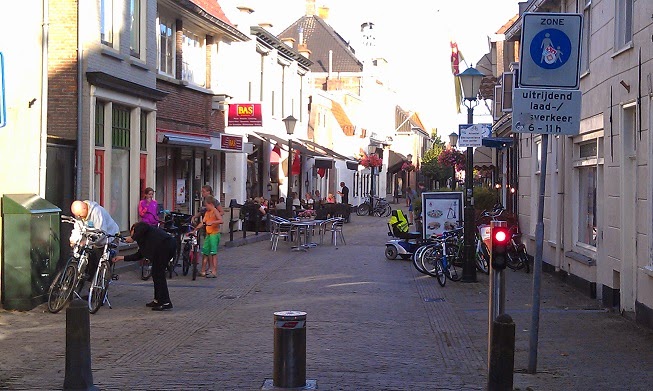 In the UK we'd be having kittens over allowing cycling here, getting the Police to ticket cyclists for riding here. It doesn't matter in the Netherlands as anyone cycling here would be going slow.  If they want to go fast, there will be a faster parallel route.

Moving around the local residential or shopping area of many Dutch streets you find one-way streets for motor vehicles with street design to keep speeds low, but cycles are allowed to go two-way. 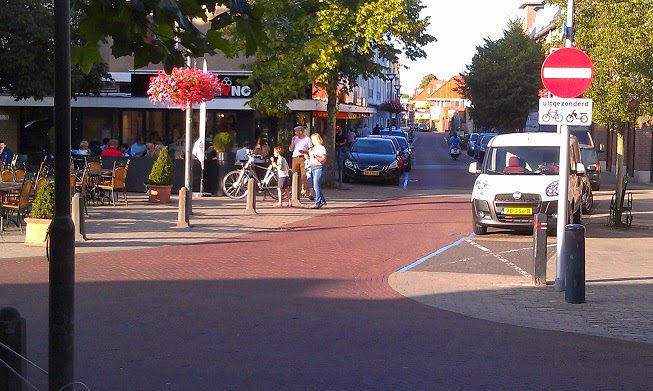 Many villages we passed through, had a single high street where through motor-traffic had to pass.  You might see on road cycle lanes. 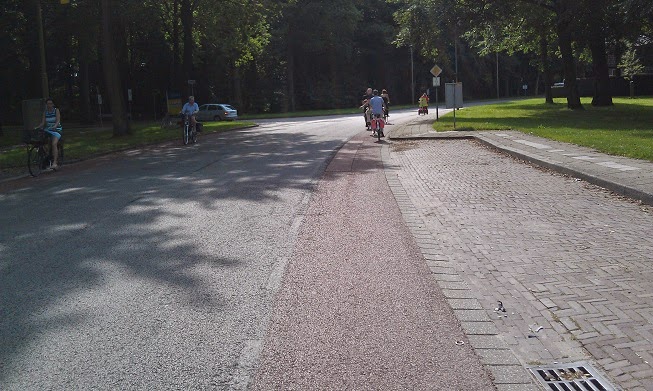 On-road lanes?  We hate them with a passion in the UK especially when they still take you close to traffic. What makes a massive difference in the Netherlands is control of the traffic:  The density is low, you are not overtaken very often; due to less oncoming traffic, cars have time to make be careful about overtaking; and the traffic speed is very well controlled with road features.  The road above would is 20mph too.

In the UK, our roads through villages are not well controlled and encourage through traffic.  In the Netherlands, it's harder for this to be a viable rat-run, and the major road network is superior.

My own village of Cottenham is a classic example. The high street is a 30mph B road, largely uncontrolled so anything from 30-50mph is possible. It has a parallel single-carriageway trunk A road but in peak hours carries an almost equal amount of traffic as the A road.

Here is another example of a cycle route.  A completely segregated cycle route joins this road for a while before reaching a roundabout and leaving the road.  It's an industrial area, with offices and a truck sales warehouse. 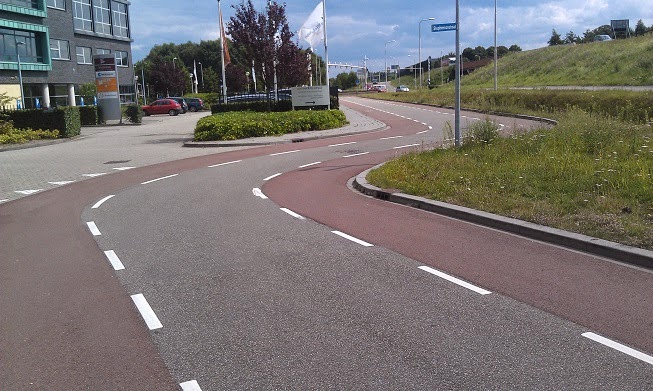 Again, it's a quiet road, and it shouts slow down to any motor-traffic.  The lane narrowing works, and even where when there is not enough room for vehicles the designers, albeit not perfect, have not given up with the excuse of not enough room.

And finally, when on main roads leading in or out of major areas, the traffic speeds and/or volumes go up and you'd end up on a segregated cycle path, more like the ones you're used to seeing.

David Hembrow has been telling us this for years.  I totally see why a study tour is essential for anyone involved in cycle infrastructure design.  Or, design for pedestrians, mobility scooters and safe liveable streets for that matter.  It really is hard to understand how all the different design aspects add up to make a great cycling experience.


A couple of relevant areas of further reading, can be found on David's site:

See The Grid and Unravelling of Modes
Posted by Cottenham Cyclist at 23:13