A road designed by a cyclist ?

Essentially, Stotfold has gained a cycle symbol in the middle of the road and all the car drivers, and a cyclist who lives in that street, can't work out why it's there.  They think the workmen have made a mistake. Well I looked at it from a cyclists perspective and I could immediately see what problem they were trying to solve - in a very British way rather than Dutch.

Britain's streets are littered with parked cars, and as a cyclist, to get round them you have to merge with traffic going twice your speed.  You have to be so assertive to move out or you get stuck, or illegally take to the pavement.

The secondary problem is the door-zone.  Cycle too close to the parked car and you risk crashing into an opening door.  When I last researched, two English cyclists had been killed in the first two months of this year as a result of dooring.

So, it's obviously a message to drivers that cyclists need to be there (with that current road design).

Closer to home, there are cycle symbols all over the place.  Some in Histon and the ones I asked for in Cottenham. 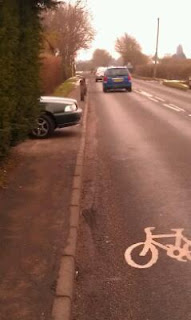 I asked for the ones in Cottenham to go in because there was a problem with aggressive drivers trying to force cyclists onto the pavement - the drivers incorrectly thought the pavement was a cycle path.  Really, I don't think they thought it through that much, they just wanted that bicycle out of their way so they could go faster and any excuse would do.

Before the symbols, I would be close-passed every other day, and tooted or arm waved at every other week. After the symbols went in the abuse is almost non-existent. 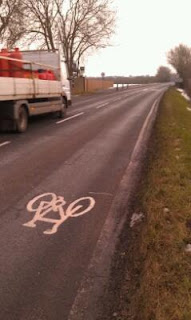 They are also educating drivers who shouldn't need educating about sharing the road safely - they passed a test!  It does show how driver skills need to be updated and most of all, the Daily Mail article shows how little Britain cycles and understands what it is like to be a cyclist sharing the roads.

The painted symbols have rather cheaply solved one problem, but of course they are no replacement for a real solution to cycling in rush hour traffic, of which a third has been measured speeding on Histon Road, Cottenham.


A road designed with cyclists in mind shouldn't need a painted cycle symbol, but its become a cheap way to re-educate drivers while we work out how to retro-fit cyclists back into our existing streets.
Posted by Cottenham Cyclist at 14:43 2 comments: