I've just spent 24 hours of my weekend travelling around London by tube, bus, bicycle and on foot, but a few hours was by bicycle. Normally I ride commute in to, out of and around Cambridge, one of the UK's most cycled cities.  How does London stack up?

Every rider is different. Cards on the table ... I ride a lot and I can go fast, commuting on a touring bike, but I can also be found on a road bike, mountain bike, and motorcycle. I also spent a few years commuting in London in the 90's prior to the congestion charge. So this is the first time I've ridden London's roads in two decades.

We used Boris Bikes (TfL Barclays Cycle Hire). You can hire on the street without pre-registering and its cheap - can be as little as £2 for 24 hours if you complete each journey within 30 minutes. If you have an Oyster Card, the tube costs from £2.10 for a single journey capped from £7 per day;  buses costs are £1.40 a journey, capped at £4.40 per day.  It took us a while to get the bikes for the first time, just yank really hard after the green light.

I've driven in London and know the roads are a dog-eat-dog kind of place so I tried to take us on quiet routes. If you visit the OpenCycleMap layer of OpenStreetMap you'll think you've hit the jackpot. 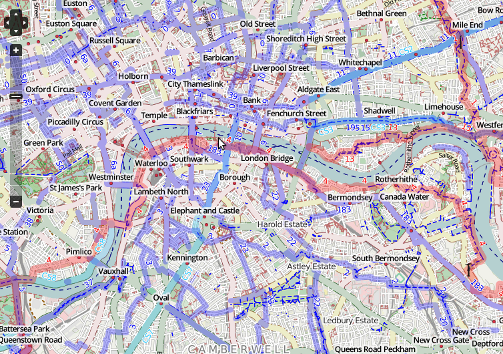 Central London has loads of quieter cycle routes. The local cycle routes are marked with a darker blue on OpenCycleMap.  But, just like Cambridge they are hard to follow and can be indirect meandering with many left and right turns.  I was armed with a Garmin GPS and a phone with OpenCycleMap and I was struggling. I'm not quite sure what the typical Boris bike user does.

I also noticed some aspects of filtered permeability, i.e. no though routes for motor vehicles but bicycles and walkers can get through.  It works really well for short local journeys, keeping us well away from fast traffic.

If I had one tip for London.  Get these local cycle networks really well signed. If you want to splash paint about, this could actually help.

Even following local cycle routes we found ourselves following major roads and crossing them.  I'm used to riding in Cambridge traffic but found the London drivers way more assertive. This is ok when driving, it seems to work, but on a bicycle I found myself unable to merge with traffic as easily as normal.  Part of the problem is that I was riding a slow upright bike. Merge into traffic with such as speed difference is like a leap of faith.  We quickly found ourselves making right turns not by crossing multiple lanes of traffic, but dismounting on the left and using pedestrian crossings. Safe but slow. It felt like a poor man's Dutch junction.  No wonder most commuters are males on fast bikes.

Thankfully I didn't have to cycle the CS2, but did see it from a bus on a Sunday.  I've seen it described as just paint and giving a false sense of security.  From the top-deck I could see there were so many parked cars in the bus and cycle lanes on a Sunday and that any rider would find themselves merging into traffic constantly causing conflict.

We also passed a yellow Police sign asking for witnesses to a cyclist fatality I read about on the web, and realised we were not too far from Bow roundabout where there has been a three fatalities now. Pictures of CS2 can be viewed at Cyclists in the City.

The nearest you'll get to London's cycling environment in Cambridge are the dual carriageway sections of the ring road and Elizabeth Way, the bus lanes on Newmarket Road, and Queens Road for all its parked cars. Often in Cambridge there is a cycle path somewhere nearby. Traffic in Cambridge is far more easily controlled and rarely comes as close - when riding fast at least.

That day I found myself having to move out around parked cars to merge with fast approaching coaches on Grays Inn Road. I also watched a taxi drive very close behind my partner off the lights after we waited in an advanced stop box.

The worst mistake I made was at a traffic lit T junction near Limehouse (pictured below). The lights went amber as I crossed the line and I continued. Before I'd even made it to the first traffic lane I heard engines roar. There could have only been a precious second or two between light phases for vehicles to clear the junction - designed for vehicles at 30mph. Time limited for traffic flow over safety.

Would I cycle in London again?  On the local cycle routes, yes without a doubt.  Would I as a commuter?  I wouldn't want to on the more main routes, but faced with packed public transport, and as an experienced, committed and fast cyclist I would reluctantly learn how to survive. It's not for normal people.

Posted by Cottenham Cyclist at 23:35